“And a man shall be as a hiding place from the wind, and a covert from the tempest; as rivers of water in a dry place, as the shadow of a great rock in a weary land.” Isaiah 32:2

“A man!” This first word forms the key to the precious verse, it is “The man Christ Jesus!” And when and where is He thus revealed to His people as their hiding place and shelter? It is, as with Elijah of old, in the whirlwind and the storm! Amid the world’s bright sunshine, in the tranquil skies, uninterrupted prosperity, they seek Him not! But when the clouds begin to gather, and the sun is swept from the firmament; when they have learned the insecurity of all earthly refuges, then the prayer ascends, “My heart is overwhelmed, lead me to the Rock that is higher than I.” The Earthquake, the Tempest, the Fire, and then “the still small voice!” 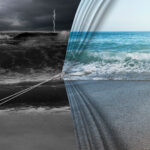 Sorrowing believer, you have indeed a Sure Refuge a Strong Tower which cannot be shaken! The world has its refuges too. But they cannot stand the day of trial. The wind passes over them and they are gone! But the louder the hurricane, the more will it endear to you the abiding Shelter; the deeper in the clefts of this ROCK—the safer you are.

Delight often to dwell on the humanity of Jesus; you have a brother on the throne!

a “living Kinsman,” one who “knows your frame,” and who, by the exquisite sympathies of His exalted human nature—can gauge, as none other can, the depths of your sorrow.

An earthly friend comes to you in trial, he has never known bereavement, and therefore can not enter into your woe. Another comes; he has been again and again in the furnace; his heart has been touched tenderly as your own; he can feelingly sympathize with you. It is so with Jesus. As man, He has passed through every experience of suffering. He has Himself known the storm from which He offers you shelter. He is the ROCK, yet “a Man!” “Mighty to save;” yet mighty to compassionate! “Emmanuel, God with us!” He is like the rainbow in the heavens which is in the clouds, each base of its arc rests on earth. Or like the oak which can wrestle with the tempest, yet invites the most feeble bird to fold its wing on its branches!

…Go sit under your “Beloved’s shadow with great delight.” Hide in His wounded side! Because He who roused the storm is the hiding place from it. As you journey on, gloomy clouds around you, let this bright rainbow of comfort ever arrest your drooping eye. “For this reason He had to be made like His brothers in every way. Since He has gone through suffering and temptation, He is able to help us when we are being tempted/tried.”